The HD9725LG Logo Inserter system is a complete HD/SD Logo Insertion package that will key one, or many, static/animated "bugs" over an HD or SD video signal. Logos created in BMP, Tiff, TGA or WAV file formats can be imported into the Evertz®

software and transferred to the HD9725LG via Ethernet. Logos are stored in flash memory and can be quickly accessed via front panel, quick select keys, GPI inputs, automation and

. With the removable Compact Flash option you can have access of up to eight Gigabytes of online logo storage space and virtually unlimited archived media storage.

The HD9725LGA Media Inserter system is a complete Logo and Audio insertion package that will key one, or many, static/animated "bugs" over an HD or SD video signal. It will also duck program audio, insert preformatted audio clips (WAV files) and voiceovers.

The HD9725LG and HD9725LGA have been designed to manage and store multiple logos. The size of each logo is variable and ranges from 1/25th to full screen. The position of the logos, fade rates, clip association and animation rates are all user-controllable.

Up to 16 logos can be keyed simultaneously with independent fade control for each logo. The onboard preview allows you to cue your logos for position and content verification prior to going "On Air". The Media Inserter Voice Over audio input allows for 1-button audio switching. 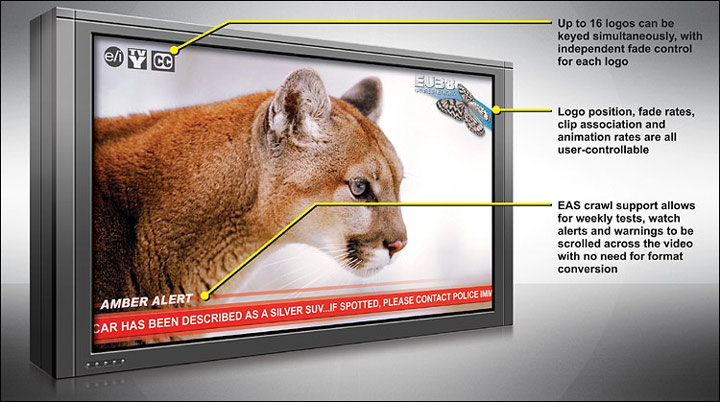 The EAS crawl support allows for connection to an existing EAS decoder. This RS-232 connection allows weekly tests (white text on green), watch alerts (white on yellow) and warnings (white on red) to be scrolled across the video with no need for format conversion. The variable height text font can be positioned anywhere on the screen and rendered with any TrueType font. A GPI can be used to insert the EAS audio on the HD9725LGA.

The HTXT option allows for the creation of custom text messages that can be displayed as crawls or fixed position fields on top of keyed graphic logos. These user-defined elements can be dynamically updated by Ethernet using the

software. Text crawls and fields retain display information such as background/foreground transparency, color, position and font while the dynamic text may be changed without recreating the associated logo graphics.

is an easy to use graphical interface that integrates the speed of fast Ethernet, with the ease of drag and drop functionality to deliver a central access point to Evertz keyer products. The software enables the management of media files, which are used to produce the branding.

enables the user to manage media files over a large TCP/IP network. Users can manage their entire network of Media Branding products from one central location.