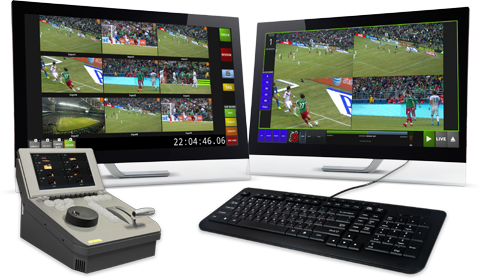 The DC-VAR is a scalable replay review platform that provides officials the ability to make the definitive decision in the shortest possible time through a tailored interface. The DC-VAR can be used as a single system in small mobile units, or dynamically scaled to a massive networked cluster in a centralized replay center.

The DC-VAR platform can be tailored to fit any review requirement. Replay officials can view all angles in sync while utilizing one-touch zoom for immediate analysis of any detail. This innovative platform allows for first down/offside line implementation along with live statistics integration to enable an informed decision.

The DC-VAR offers the flexibility to record HD, 3G, 4K and high-frame-rate cameras on the same platform. The dynamic system has an integrated transcode engine that supports all major codecs. With an established track record providing replay review for the top sports leagues in the world, the DC-VAR has proven reliability.

The rugged chassis supports up to 8x I/O in HD/3G, with storage options up to 10TB per system. The DC-VAR units can be networked for scaling over an IP infrastructure and each system has an additional 1TB of near line secondary storage for archiving content.