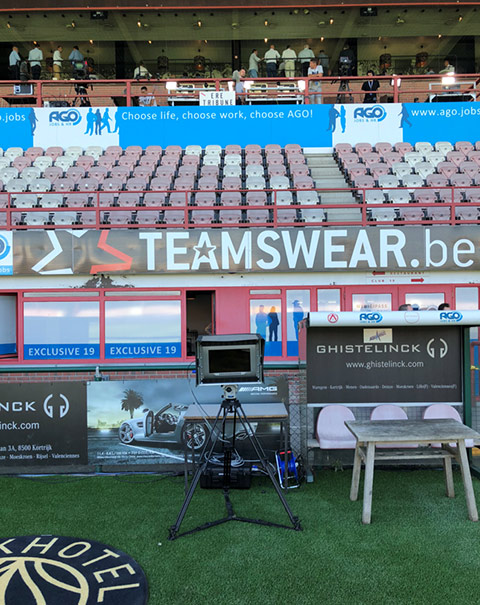 The demand for football to employ a video referee system has gained substantial traction over the years due to successful implementations of video review technology in other major sports. In March of 2016 The International Football Association Board (IFAB), who acts as the governing body for FIFA's Laws of the Game, approved a two-year period of live experiments using video to assist referees in identifying clear errors in match-changing situations to ultimately determine if Video Assistant Referees (VARs) would improve the game.

Shortly after the announcement, a set of protocols and principles were established by The IFAB and many top flight football leagues began testing with technology providers in both offline (VAR does not have any influence on the match) and online matches (VAR has a line of communication with the on-field officials).

As of March 2018, The IFAB unanimously approved the use of VAR technology in association football going forward due to the positive impact it made to the sport during the experimental period.

The Jupiler Pro League (JPL) is the top football league in Belgium, consisting of 16 association football clubs. JPL is currently ranked 10th in the UEFA rankings of leagues based on performances in European competitions over the last five years.

In December 2016, the JPL was one of the first domestic football leagues to acknowledge their participation in the initial offline testing phase of VARs and selected Evertz as their technology provider.

After much success with the offline trials, the governing body of the JPL decided to move forward with the online testing of VAR technology for the start of the 2017-2018 season. In order to accomplish a full-scale roll out of the video technology, a partnership between Evertz and StudioTech Belgium was established, which included creating a fleet of vans to act as mobile Video Operation Rooms (VORs) completely outfitted with the Evertz VAR solution.

Each mobile VOR has been equipped to fit the current needs of the JPL through a combination of Evertz' industry leading broadcast technology. At the heart of the solution is the DC-VAR. This scalable replay review platform provides JPL officials with advanced tools to make a definitive decision in the shortest possible time. A familiar controller design and intuitive touch interface provides VAR Replay Operators the ability to quickly zoom, rewind, and adjust playback speed of video on all broadcast cameras while remaining frame accurate. This provides views of any necessary details for precise analysis of the situation being reviewed.

DC-VAR allows for custom button creation which provides quick execution of repetitive actions as well as enabling groups of cameras to be viewed based on spatial playing regions.

All Evertz equipment currently being used in the mobile VORs is prepared for installation in a centralized replay center and is ready for use in a remote facility if JPL chooses to go down that route. With an impeccable track record providing replay review for the top sports leagues in the world, the DC-VAR has proven reliable in both mobile and centralized designs.

A cluster of DC-VARs provides a scalable and flexible VAR platform that fulfills the requirements for each match day. Multiple operator stations can be linked together for seamless viewing and control of all broadcast cameras on a single monitor for the Video Assistant Referee. The simplicity of the DreamCatcher™ VAR interface allows match officials to efficiently operate the VAR platform without the need for industry trained replay operators. This improves the overall accuracy of the video review process and helps achieve the main philosophy of the VAR project, "Minimum interference - maximum benefit."

The DreamCatcher™ VAR platform provides an automated process that exports clips of situations to The IFAB for further analysis. This allows for VAR project managers to easily comply with the reporting and data collection protocols of The IFAB. The flexibility of Evertz equipment allows it to replay previously recorded matches and clips so they may be used as a training tools. Each DreamCatcher™ VAR installation also includes enrollment in the DreamCatcher™ VAR Academy for all Replay Operators, VARs, AVARs, and Technical Guarantees. This academy is taught by a dedicated Evertz VAR specialist who provides detailed training for all positions in the Video Operations Room on VAR protocols and workflows.

The JPL's VAR platform provides an accurate, time effective solution to the league's challenge of creating a fairer and more transparent competition. The tailored VAR interface allows both experienced operators and new comers such as referees to be successful at delivering the best angles for viewing through the help of the DreamCatcher™ VAR Academy.

The impact of Evertz' solution on the JPL cannot be denied as stats from the 2018 playoffs show that over 475 incidents were reviewed, of which 30 resulted in the use of video correcting the decision on the field. Each review was timed and found to have an average length of only 17s. This average highlights the minimum interference VAR technology plays on the flow of the match. After a successful 2017-2018 trial year, the JPL has selected Evertz DreamCatcher™ VAR solution to handle the video refereeing technology on a 6-year contract, the longest deal of its kind.