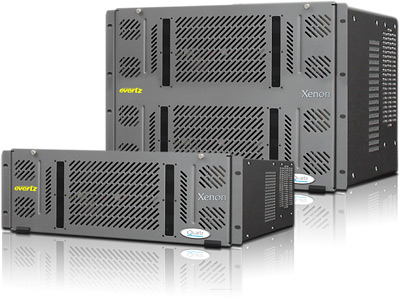 Xenon brings many advanced new capabilities to the world of routing switchers, building on a new generation design that starts with a solid, multi-format router core. In today's broadcast environment, a router must be reliable, resilient and cost-effective. The Xenon excels in all of these areas while offering the flexibility of multi-format operation, and the ability to add Signal Processing Technology.

Great care has been taken in designing Xenon to avoid single points of failure. Active assemblies are all hot-swappable from the front of the frame. Power, control, cooling and reference generation are available in redundant configurations

The Xenon router includes, as standard, an internal Frame Controller module which supports 4x Q-Link ports, 2x Ethernet ports and 2x Serial ports mounted on the rear of the router.

The Xenon has a number of control options:

The input and output stages of the Xenon can be expanded in steps of 32x at any time by adding additional I/O modules. The Xenon can not be expanded beyond its frame size.

The power supplies for the Xenon are internal. The 4RU and 8RU frames can be fitted with an optional redundant power supply with separate AC power inlet and alarm output.

By offering a format-independent data path, the Xenon supports signals from 3MB/s all the way up to 3GB/s including SD-SDI, HD-SDI, 3G-SDI, DVB-ASI, digital video formats as well as optical formats and other high data rate signals.

Xenon supports 3G, HD, SD and ASI video routing. It is available as 3G/HD/SD or HD/SD offering cost savings for those who do not require 3G. Reclocking modules are fitted by default, but optional HD/SD non-relcocking modules or SPT modules for clean and quiet switching can be populated in blocks of 8x outputs.

The Xenon router is a fully featured Stereo Audio router, supporting AES and Analog Audio routing. Balanced or unbalanced AES on BNCs are supported in any mixture in blocks of 32x inputs or outputs. Analog audio I/O is converted and routed as digital so that analog sources can route to AES destinations and AES sources can route to analog destinations. Analog blocks are in groups of 32x stereo pairs. The Xenon can optionally support Mono routing for AES and Analog audio by adding the +SS option. Additionally, the Xenon also supports MADI I/O as an option on all audio I/O cards. On input cards this adds a MADI connector for MADI input. Note that these inputs are in addition to the analog or AES base I/O. On output cards a MADI output connector is added. This too offers MADI outputs in addition to the base I/O card.

Xenon supports SNMP signal monitoring and comprehensive system monitoring, including power supply voltages, interior temperatures and fan speeds. System status may also be monitored remotely by a network based remote connection over TCP/IP or a direct serial connection to a PC. User-configurable closing contacts are also provided for connection to an external alarm system.